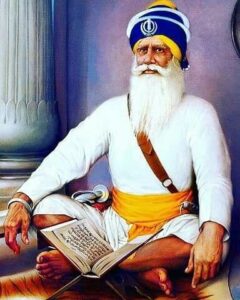 Baba Deep Singh ji was born in the village of Pahuvind district Amritsar, in the year 1682. Baba Ji’s father’s name was Bhagto Ji and his mother’s name was Jioonee. From a young age Baba Ji had practiced reciting Gurbani, singing Kirtan and doing Sangat of fellow Gursikhs, morning and night. He regularly went horse riding and training, in Shastar Vidya (weapons training). He was a lovable and popular character, who conducted himself very well. The people in his locality treated him with great respect because of his religious nature.

Just before leaving the world, Sri Guru Gobind Singh ji ordered Baba Deep Singh ji to go back to Damdama Sahib and continue the Taksal (school) that taught Gursikhs the correct meanings and pronunciations of Gurbani. All the Gurdware at Damdama Sahib were also put under the management of Baba ji by Guru ji. Here Baba ji prepared Gurbani Pothis/Anthologies and sent them to numerous Sikh shrines and thus made a massive effect on promoting/spreading the message of the Guru. Baba ji also assisted Baba Banda Singh ji Bahadar in all of his battles between 1708 and 1715.

Baba Deep Singh ji was not only a great scholar in Gurmukhi (the language created by the Sikh Gurus), but also a great scholar of Arabic and Persian, he was the first writers of the Sikh Panth. Baba ji wrote a Saroop of Sri Guru Granth Sahib ji in Arabic and sent it to the Middle East. This was a great service that was done by Baba ji for the Sikhs of these countries.

The Gursikhs of the Panth had and have great respect for the great scholar, philosopher and saint soldier Baba Deep Singh ji. The title of Nawab given to Bhai Sahib Kapoor Singh ji by Zakaria Khan, out of respect was placed at the feet of Panj Pyare before it was taken up, Baba ji was present in these Panj Pyare. After Deewan Darbara Singh ji left the world for Sach Khand, two Jathe (battalions) in the form of Budha Dal and Tarna Dal were formed. Tarna Dal was made up of five sections each having a jathedar. Shaheed Baba Deep Singh ji, was appointed one of these five jathedars by the Sikhs. There were 2000 horse mounted Gursikhs in Baba Ji’s jatha.

When Massr Rangar was disrespecting Sri Harmandir Sahib it was a Gursikh, Jathedar Budha Singh ji, from Baba ji’s jatha that sent Bhai Sukha Singh and Bhai Mehtab Singh to avenge the sacrilege that was occurring (Masr Rangr had turned Sri Harimandir Sahib into a party hall, with prostitutes). Bhai Sukha Singh and Bhai Mehtab Singh decapitated Masr Rangar and his head at the feet of Jathedar Budha Singh ji when they came back. Baba ji heard news of Jahan Khan continuing atrocities against the Sikhs and the sacred Sarover (nectar pool) of Sri Harmandir Sahib.

Baba ji reached Taran Taaran Sahib and bathed in the holy Sarover along with a jatha of 500 Gursikhs, all wearing clothes in the sacred colour of saffron and ready for battle. After making Karah Parshad (an offering made to Guru ji, made using butter, sugar, flour, water and Gurbani) and making the following ardas: “Until Sri Harimandir Sahib is free from the tyrants, I will not become shaheed.” Baba ji along with their jatha set off for Sri Amritsar Sahib.

Upon seeing this Pathan Jahan Khan confronted Baba ji, both their heads were cut off as they struck each simultaneously.

A Gursikh called out, “Baba ji, you promised to place your head at the feet of Sri Guru Ram Das Sahib ji at Sri Harimandir Sahib.” When Baba ji heard this he picked up his head in his left hand, took up his sword in his right and continued fighting. The tyrants were so astounded by this event that some started to run away, as they left the battlefield they told their fellow soldiers that the General of the Sikhs is fighting without his head.

While fighting Baba ji progressed to the parkarma (the outer circle) of Sri Harmandir Sahib, with the Sikhs shouting war cries. Baba ji placed his head at the feet of Guru Sahib ji and after completing an ardas left the world for Sach Khand. 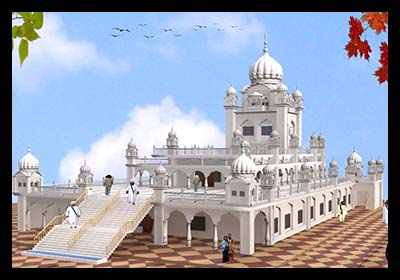